As a part of this exciting festival of golf, fans will have the chance to soak up the atmosphere of the Celebrity Series, where famous names from the world of sport and entertainment will take part in their own pro-am tournament such as Steve Staunton, Brendan O Carroll and Keith Duffy to name but a few. Additionally, amateur golfers will have the opportunity to play as a ‘Legend’ in the Alliance Series under full tournament conditions, while experiencing the lifestyle of a professional golfer against the stunning backdrop of Donegal.

Spectator tickets are now on sale, with adult season and daily tickets starting at just €15 and €10 respectively, while children under the age of 16 will gain free admittance to all three events. Tickets will be available at the gate on the day, but spectators are recommended to book in advance to guarantee admission at https://tickets.legendstour.com.

Festivities kickstarted on Monday when Paul McGinley was awarded the freedom of Donegal. Mc Ginley has been honoured in recognition of his golf achievements on the European and PGA tour, his winning captaincy of the 2014 European Ryder cup Team and for his enormous contribution to promoting Donegal as a golfing destination.

Speaking on the county Paul spoke of the honour of receiving the prestigious accolade. He also spoke of the potential Donegal has moving forward: “if Donegal was a stock I would be buying it now… Donegal has so much to offer.”

Speaking on this week's events, Cathaoirleach of Donegal County Council, Cllr. Liam Blaney stated “Donegal County Council are proud sponsors of this tournament which will make an important contribution to the local economy as well as a fantastic showcase for the important lucrative golf sector in Donegal. The event will be tracked by a number of TV stations which will bring the event to a global audience, with all eyes on Donegal.”

In addition to the golfing event, Donegal County Council are hosting a number of musical events to coincide with the conclusion of golf in the grounds of the Na Dunaibh GAA pitch in front of an expected audience of 3,000 in what promises to be an unforgettable event with Na Mooneys headlining on Friday 19th and Nathan Carter on the 20th August. Tickets for Nathan Carter are now sold out but tickets for Na Mooneys are still available and can be availed of free of charge. 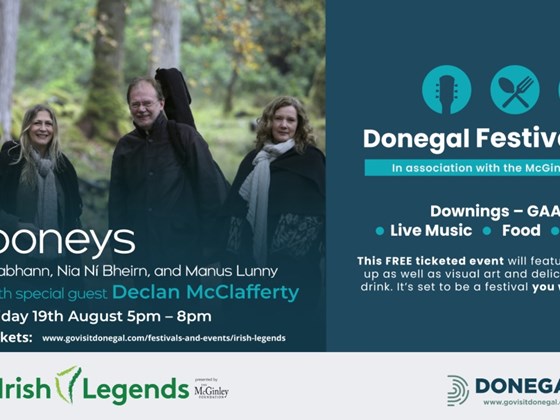 Get your Free Tickets for Na Mooneys Concert Here

Programme of events announced for the AER Summer Academy 2022