While growing up across various coastal locations around Scotland, Iain Miller has always been drawn to the sea. After leaving school, Iain joined the Merchant Navy as an engineering cadet. For 20 years, he has sailed around the world on several occasions on many naval vessels. While out at sea, Iain reminisced about his Scottish mountains and outdoor spaces where he would roam in his free time. When returning home from the sea, he would train for the next sea stack or mountain on his bucket list to climb. Iain knew this was his passion in life and wanted to transition into being a full-time rock-climber or mountaineering instructor.

His love for exploration took him to Donegal during the mid ‘90s to explore the rugged landscape before moving back to Orkney in Scotland. Astounded by the lifetimes worth of unclimbed rocks, sea stacks, cliffs and mountains in the county, Iain decided to move to Donegal permanently in 2004. He mentions Dunaff Head in Inishowen, the seaward faces of Árainn Mhór, Toraigh and Uaigh Islands as notable examples of what instantly drew him to the county.

While continuing to work in shipping, Iain was increasingly asked by friends and family to take people on climbing excursions off the coast of Donegal. After being involved in the first ascent of Cnoc na Mara sea stack off the coast of Tormore Island in West Donegal, Iain identified a gap in the market and realised he could make a living from excursions. Shortly after Unique Ascent was born. Iain’s business has allowed him to follow his passion for exploration and facilitates others in being involved in fantastic experiences off Donegal’s coast.

With over 30 years of experience exploring the outdoors, Iain is always searching for the defining moment - "The road and sea journey allows me to reach a level of mental equilibrium in which there is no room for thoughts of the past and future, only the present - living in the moment, as it is commonly called. This is an extremely dangerous place to be because if you are truly in the moment you can have the mistaken belief that you are immortal."

When asked what makes Donegal such a world-class destination for winter sports, Iain outlines how the county “has more climbable rock than the rest of Ireland combined boasting two major Irish mountain ranges, one hundred sea stacks and over a thousand kilometres of coastline, making it a sea kayakers paradise along the Wild Atlantic Way.”

Discussing his favourite locations across the county, Iain outlines the shark finned shaped Cnoc na Mara as his favourite sea stack among all. Standing at 150 metres high, the climb is the most rewarding and adventurous rock climbs in the country.

The summit of Tor Mór at the eastern edge of Toraigh, An Eochair (The Anvil) was next on his list. The Anvil is an outstanding 400-metre long rock ridge sticking out into the Atlantic Ocean for 400 metres to the spectacular Tor Mór summit at its distant seaward end. At its highest point is Tor Mór stands 70 metres high and in many places a true knife-edge with spectacular drops at your feet into the ocean on either side of you.

Iain also discusses the mini archipelago of islands Na Mic ó gCorra, consisting of three very small rocky islands living approximately seven kilometres north-west of Kincasslagh on the Donegal mainland. “There are very easily seen from most places along the Rosses coast and always look very distant indeed. They are known by several different names such as The Brothers, The Three Sons or simply The Stags in Irish they are called Na Mic Ó gCorra or the sons of Corra. The Irish story Seachrán na Mic Uí gCorra by Pádraig Ó Gallchóir and Clannad's Na Laethe Bhi are both based on this archipelago.”

Regarded as the world’s only professional sea stack climber, Iain’s extensive experience ensures Unique Ascent offers customers an experience like no other. Having worked with Children who have never climbed before to Red Bull athletes and everyone in between, you are in a safe pair of hands. Whether it’s an unclimbed cliff, uninhabited island, sea cave or summit or Ireland or the UK’s mountains, Iain will guide you through your journey. Every experience is tailored depending on the group’s aspirations, experience, fitness or the weather and sea conditions on the day, making your experience truly unique. The company’s mantra is “Let’s make the best possible use of our time together”, something which Iain ensures.

For #BuyDonegal 2021, Unique Ascent is offering his rock-climbing experience off the West Coast of the county from €50 per person. 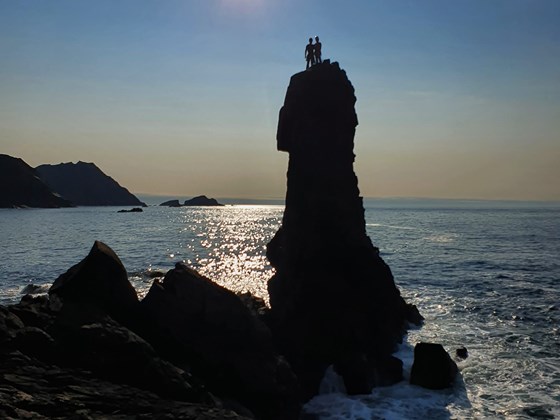 Things to see and do in Donegal

Sliabh Liag Cliff Experience announced as part of €15.5 million in funding for over 84 outdoor adventure across the country