The 2021 Golden Bridges conference will be held virtually on the 19th of November and will feature a panel of speakers including political leaders, business and community representatives, tourism and education providers from Ireland North West and Boston who will join together to further bind their relationship as the regions start to recover from the COVID pandemic. Among those confirmed to participate are several notable Donegal entrepreneurs and experts.

A successful local entrepreneur, Declan Ward is the Managing Director of Irish Pressings, based in the Gaeltacht region of West Donegal. His passion for the automotive industry has influenced his career in relation to design, new product development, research and development, tool manufacture and project management in global companies including Ford and General Motors before establishing his own business, Irish Pressings, in 2005 which now employs over 70 people.

Garry Martin, Director of Economic Development, Information Systems and Emergency Services with Donegal County Council, has worked diligently to foster the ecosystem and infrastructure available in Donegal in order to develop the economic and investment potential of the region through specific council interventions and collaborations. Throughout his career, he has worked with several small businesses based in the county helping them to grow and expand, as well as developed a wide range of programmes aimed at economic development and capital infrastructure development in areas including Tourism and the Diaspora Programme.

An expert in the field of Tourism, Joan Crawford has over 25 years’ experience and knowledge of both the private and public sector including Aer Lingus, North West Tourism, Donegal Tourism and Fáilte Ireland. The Wild Atlantic Way programme has been hugely successful in promoting not only Donegal, but the entire west coast of Ireland covering an area of 2,500km. Joan’s involvement managing the programme has contributed to its ongoing success and future progress.

Sonia Nic Giolla Easbuig is the Managing Director of LIGID Léiriúcháin, an award-winning Television Production Company. Her work has taken her across the world to create award winning documentaries through the medium of Irish on a wide range of diverse and interesting topics including “Children of the Palestine” and a docuseries called “Bhí mé ann”. She has also worked on documentaries promoting local topics and landmarks including “the Story of Bád Eddie” and “The Donegal Hiring Fairs”. Among her accolades are many prestigious awards include winning the Prix Circom International Documentary Section twice, the Amnesty International Human Rights Worldwide TV award and a Celtic Film Festival nomination. The success of the company is lead by Sonia’s passion for film making and her passion for covering important topics not only close to home, but on a global scale.

This year’s conference is being jointly coordinated by Derry City and Strabane District Council and Donegal County Council with Aisling events and will take place virtually, broadcasting from the Gteic in Gaoth Dobhair in the West of Donegal.

Golden Bridges aims to promote partnerships between Ireland Northwest and Boston, Massachusetts and also to highlight various community, business, and education initiatives in the two regions by bringing together influential business and political leaders.

Information on registering and the conference is available here 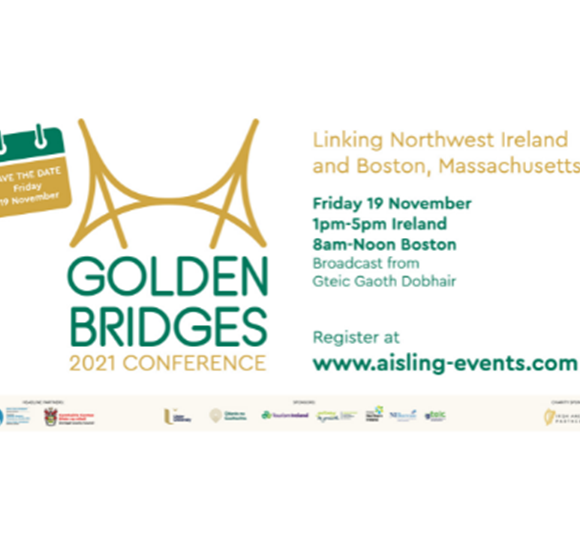 Why invest in Donegal?