In these uncertain times, despite the lasting impact the COVID-19 pandemic has had on our lives in so many ways, we wanted to bring back the true sense of togetherness that a festival embodies.

Our programme for 2021, in our 33rd year, aims to safely and securely bring us together once again to celebrate great art and Irish culture, with a hybrid programme of online and live performances for you to enjoy, participate in and engage with at home and in person.

Lighthouses - symbols of light and hope - of which so many shine from the coastline of Donegal, provide the gateway  to this year’s programme, both in the commissioned artwork by Dermot Flynn and in the live dance and music performances, new commissions, self-guided film and audio installations in and around Fanad, Stroove and Tory Lighthouses.

From Ireland’s most northerly village Malin, to the lowlands of East Donegal, through the Finn Valley and the gateway town of Letterkenny, to the townlands and islands of the West Donegal Gaeltacht, Tumble Circus’ co-commissioned Cycle Circus and Fidget Feet’s aerial street arts programme traverse the county.

For the return of the first live Donegal concerts we bring you a series of outdoor (covered), socially-distanced performances featuring The Breath (with Without Willow), a celebration of the bouzouki’s journey from Greece to Ireland by its finest exponents, Donal Lunny & Andy Irvine (with Duo Zouk) and a special closing concert by Donegal’s own internationally-cherished Tanya McCole (with George Houston), whilst The Henry Girls immersive Home project connects globally online in a new Home from Home format...eagerly awaiting the time when they will welcome you to their home in person on the wild Atlantic ways of Inishowen.

This year the 1500th anniversary of one of Donegal’s most famous natives, Colmcille is interpreted through a contemporary artistic response with multi disciplinary performances and installations at Cnoc na Naomh and exhibitions across Donegal from The Glebe House & Gallery (in Colmcille’s birthplace of Gartan) to Artlink in Inishowen, from the Regional Cultural Centre, Letterkenny to An Gailearaí in Gaoth Dobhair.

Developed in conjunction with the festival, the Olivier Award-winning Fishamble and Pat Kinevane premiere their first bi-lingual production of the widely acclaimed Before, translated and filmed from Amharclann Gaoth Dobhair in the heart of the Donegal Gaeltacht, whilst An Grianán Theatre’s co-commissioned Drone Bone Jetty by Little John Nee and Laura Sheerin will be screened and broadcast online with an artist panel event as part of a new partnership between Earagail Arts Festival and Century Cinemas.

In preparation for a new public engagement theatre production in 2022, we invite you to be a part of the interactive streamed discussion with the Earagail/Cairde Sligo co-produced Brokentalkers on their latest darkly comic theatre/film project – Uprooted - exploring the notion of acceptability, how newcomers to communities in Ireland experience varying degrees of acceptance depending on where they come from and how they assimilate to a new culture by abandoning their own.

Big Telly’s live action piece of participative game-theatre Right Up Your Street comes to doorsteps, living rooms and streets across 4 Donegal communities..... whilst new landscape-inspired commissioned works by Kerri Ní Dochartaigh, Abby Oliveira and Annemarie Ní Churreáin are brought to virtual life through augmented reality (AR) in the bird hides around Inch Wildfowl Reserve, in the shadow of An Grianán Ailigh.

On behalf of the festival, artists, technicians and venues, the staff and board we are delighted to be back with you again and thank you all for your continued support. 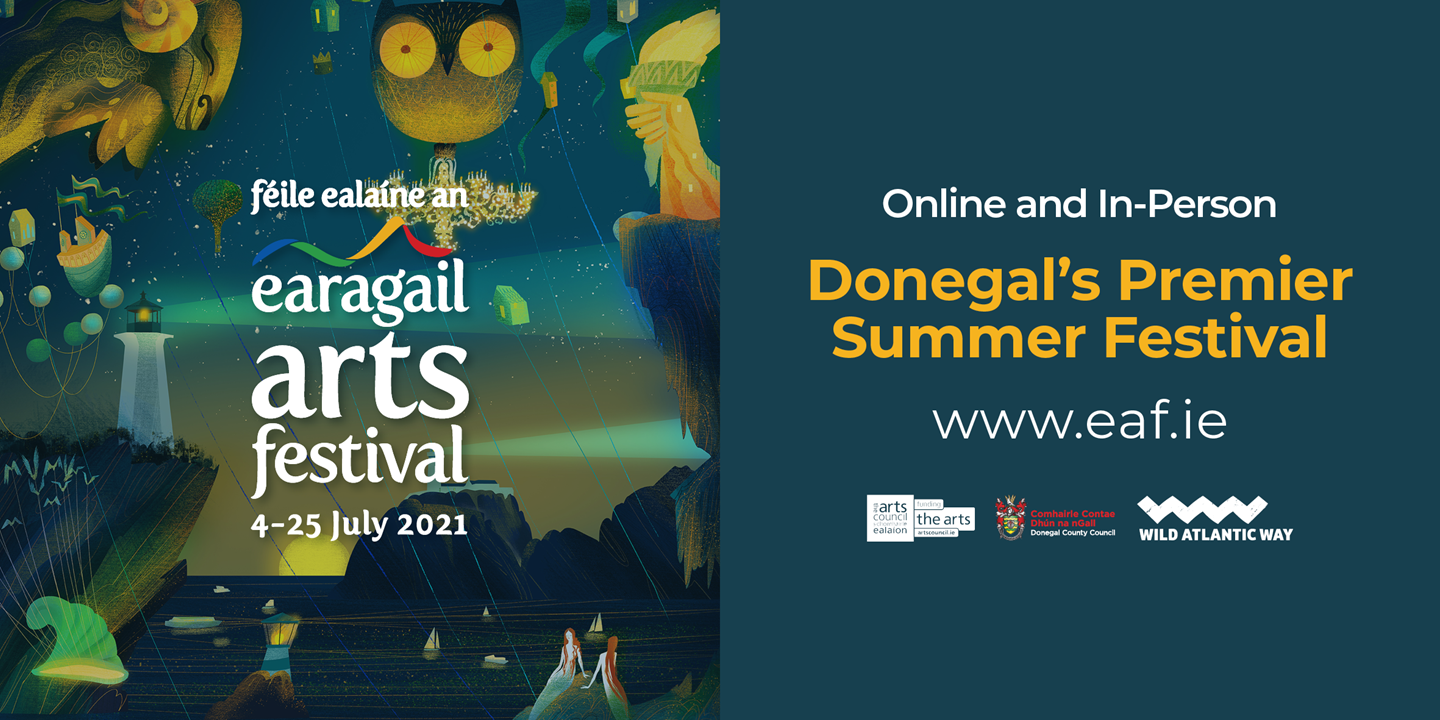