At Sliabh Liag Distillers, we have set out to reclaim the rich distilling heritage of county Donegal. Based on the rugged south-west coast of Donegal, we produce super-soft hard spirits, multi award-winning brands that are inspired by the people, the history and the landscape of the county.

An Dúlamán Irish Maritime Gin has at its heart five locally harvested seaweeds, resulting in a bright, fresh and savoury umami gin. It is distilled in tiny batches in a 500 litre copper pot still in the London Dry style, of which only a narrow cut is taken. An Dúlamán celebrates Draíocht na Farraige, or the magic of the sea and takes its name from the Irish word for one of the five seaweeds used to create it – channel wrack, Dúlamán. An Dúlamán Santa Ana Armada Strength Gin was released in 2019 and was Ireland’s first navy strength style gin. Aged in Rioja wine casks for up to 12 weeks and bottled at 57% ABV, Santa Ana is named after the ill fated Santa Ana Duquesa, a Spanish Armada Ship that ran aground near Loughross Point in Donegal.

The Legendary Silkie Irish Whiskeys are inspired by the folktales of Silkie seals, told around the Donegal coast. The Silkie whiskeys are stepping-stones on the journey to discover rich smoky Irish Whiskey. With just a hint of peat in the blend, Silkie is a soft, fruity expression while Dark Silkie, with a higher peated malt percentage, is rich and smoky while remaining sweet and smooth. In late 2021, we will release Midnight Silkie, a hefty smoky blend, to complete the collection

Assaranca Vodka, named after the Assaranca Falls, near Ardara, celebrates the famed Hills of Donegal and is distilled using two native plants, gorse flowers and rowan berries. The sweet grassy notes of assaranca are matched with the signature softness that runs through all of the spirits that Sliabh Liag Distillers produce.

Sliabh Liag Distillers have just completed phase one of construction of the new €7m Ardara Distillery. Distillation of rich smoky Pot Still and Single Malt whiskeys commenced in Ardara in late 2021. The distillery will have the capacity to produce over 1 million bottles of whiskey per year and will employ up to 50 people. Phase two of the build will see the completion of the visitor’s centre and new gin distillery.

We now export our brands to over 34 international markets with more coming online each month. Since launching our Silkie whiskeys in the USA in late 2020, we have secured distribution in all but three states, marking one of the fastest rollouts of any Irish spirit in the US market. Distribution has also been secured in every Canadian province, with advanced talks also taking place in Mexico. 2021 also saw the first shipments of Sliabh Liag spirits arrive in France, Sweden, Spain and Poland. 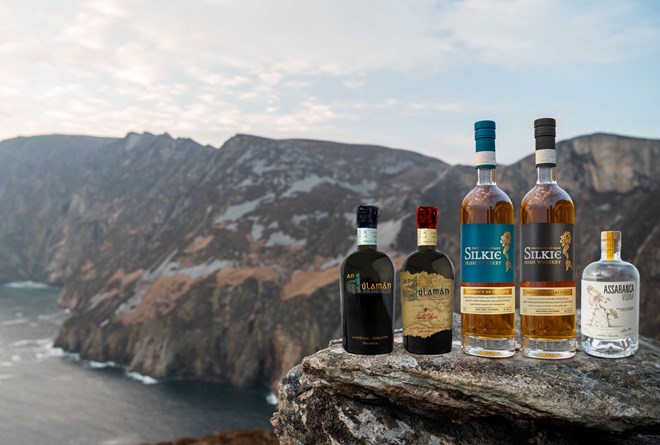