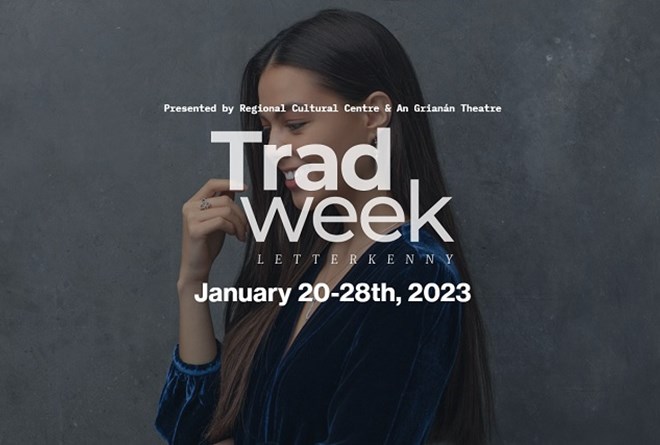 Trad Week, Letterkenny's annual celebration of Irish traditional, folk and world music, presented by the Regional Cultural Centre and An Grianán Theatre makes a welcome return to its usual January slot.  From Friday 20th to 28th the festival presents a host of world class musical acts, as well as lots of FREE events, including Ceol na nÓg / Young People's Trad Session, Pop-Up Gaeltacht & Trad Session and two lunchtime concerts in The Eatery at An Grianán Theatre.

Trad Week 2023 opens on Friday, 20th January, at 8pm in the RCC with an exciting double header featuring a musical family with strong roots in Gaoth Dobhair in the West Donegal Gaeltacht - The legendary folk group, Na Casaidigh and rising star Sibéal Ní Chasaide, known mononymously as Sibéal, who has become a household name for her haunting melismatic sean-nós singing style.

On Saturday, 21st January, at 8pm Trad Week will welcome one of the most electric trad fusion groups to the RCC for a standing gig that is sure to have people dancing!

Jiggy continues the tradition of their musical ancestors while bringing a whole new exotic flavour to the table. More of a collective than an orthodox band, Jiggy’s mercurial line-up mixes and melds Irish traditional music, world rhythms and cutting-edge dance grooves.

Over the years Lisa has quietly built a reputation for herself on the Irish and international scenes. Now she has a growing following with her unique folk sound, strong song-writing and distinctive voice. Renowned West Kerry concertina player Cormac Begley makes his first appearance at Trad Week ahead of the release of his second solo album, B.

The Dublin-based group arranges and interprets traditional Irish folk music, taking influence from such early bands as Planxty, The Bothy Band and The Chieftains.

Headlining the event are Landless - Lily Power, Meabh Meir, Ruth Clinton and Sinead Lynch. Formed in 2013 and based in Dublin and Belfast, they sing unaccompanied traditional songs in four-part harmony. In support will be Niamh Bury and Julie Avalon.

Closing this year’s festival will be one of Donegal’s finest singing families, Clann Mhic Ruairí, at An Grianán Theatre on Saturday, 28th January, 8pm.

As a family Clann Mhic Ruairí were raised on the Gaelic songs and stories of the Rann na Feirste Gaeltacht. They have now taken up the torch in the hope of conserving and promoting this rich musical culture which lies at the core of their being. Support comes from Northern Irish trio, TRÚ, Dónal Kearney, Zach Trouton and Michael Mormecha.

Líonra Leitir Ceanainn & Comhaltas Letterkenny will present two trad sessions and a Pop-up Gaeltacht as part of the week-long festivities.

The Ceol na nÓg / Young People’s Trad Session on Sunday, 22nd January, at 4pm in Dillon’s Hotel is a great opportunity for families and particularly for young people to come together and play music. It will be a great session! Don’t be shy, bring your instrument along and get involved.

Drop into Dillon’s Hotel on Tuesday night, 24th January from 8pm for the Pop-Up Gaeltacht & Trad Session and take the opportunity to for a bit of Irish conversation. There will be great craic, music, company and chat! Everyone welcome, from learners to native speakers!

The Eatery at An Grianán Theatre will once again host two FREE lunchtime concerts as part of Trad Week.

For more information on Trad Week 2023, visit regionalculturalcentre.com or angrianan.com