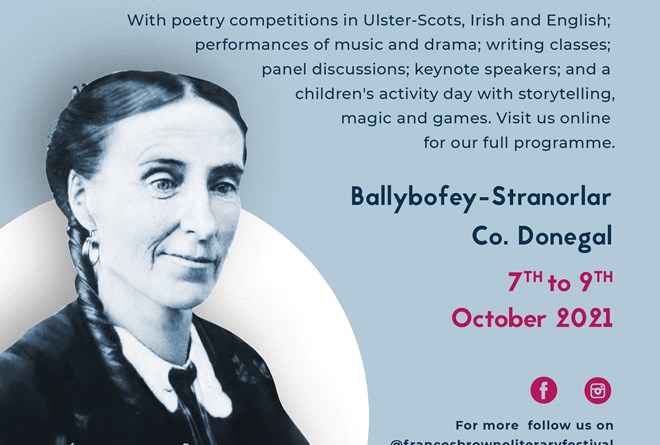 The inaugural Frances Browne Literary Festival will run from 7th to 9th October in Ballybofey and Stranorlar, Co Donegal.

The initiative to celebrate the life and literary legacy of Frances Browne has been welcomed by Dr Joe Mulholland, founder of the MacGill Summer School in Glenties who said it was important in various ways.

“I urge people of the Twin Towns and Finn Valley to support the festival. It’s a far better way of getting people to come together, than counting heads in a cross-border poll, talking about uniting territory. It’s hearts and minds you need to unite and we have an example of that in the Finn Valley and East Donegal,” he said.

The Festival features a Multilingual Poetry Competition with €2,000 in competition prizes for poetry in the English, Irish and Ulster Scots Language.

Due to Covid 19 this year’s festival will be a blend of online and in-person events.

The Ballybofey-Stranorlar area is unique in that it includes large areas where Irish, English, and Ulster- Scots are spoken widely on a daily basis. Language is culture. Culture is language. If Ireland is to have a peaceful and prosperous future, the national cultures brought together by the Good Friday Agreement must develop models for the truly pluralist, tolerant society we are trying to create. The Finn/Deele Valley in Co. Donegal, where Ballybofey-Stranorlar is located, is becoming widely recognised as a natural pilot project for this pluralist Ireland. The Frances Browne Literary Festival will play a pioneering role in introducing the area as a role model for elsewhere in Ireland.

Ranging across poetry, prose, music, spoken word, theatre, talks, masterclasses, family events, exhibitions and workshops for children and teenagers, the festival is all about encouraging local and international literary talent in Irish, English and Ulster Scots. The Festival's inspiration is Frances Browne who was, at one time, the best known writer of fairy tales in the British Isles and much of the world, said a spokesperson for The Frances Browne Festival Committee.

The festival also builds on the publication of Treasure Each Voice by the Fiach Arts Circle. Edited by Dr Pauline Holland, who is also on the committee, the work includes a section by Frances Browne. Frances Browne deserves to be remembered, not just as a poet of exceptional ability, but as a remarkable storyteller. Despite formidable obstacles posed by geographical isolation, a modest social background, gender disadvantage and severe disability, she courageously carved out a literary career for herself, she said.

About the Multilingual Poetry Competition

The Poetry Competition has entries in three categories: English language; Irish language and Ulster-Scots. The winner in each category will receive a prize of €250 with 2nd and 3rd prize attracting €150 and €100 prizes respectively. Entry to the competition is now closed.

Talks and workshops with Anna Carey, a journalist and author of five books for young adults from Dublin who will give the keynote address.

A talk by Dr Brian Lacey in Raphoe.

A Panel Discussion on Friday 8th Oct will look at how language and culture shape our concept of home, in the context of Browne's work, and in our own experience?

The Awards Ceremony for the Frances Browne Multilingual Poetry Competition on Friday night in Kee’s Hotel.

The premier of Shirley Anne Bonner's adaptation of Frances Browne's Legends of Ulster will be directed by Kieran Quinn at the Balor Theatre, Ballybofey.

The Children's Day on Saturday 9th Oct is not to be missed - Street Theatre specialist Louise Conaghan will entertain children with stories and Jessica Harkin, a magician, dance, Victorian Street Games and much much more.

The festival closes with a performance of In My Mind’s Eye by Shirley-Anne Bonner at An Grianan Theatre, Letterkenny. This special event will give a taste of the full production planned for the 2022 Frances Browne Literary Festival.